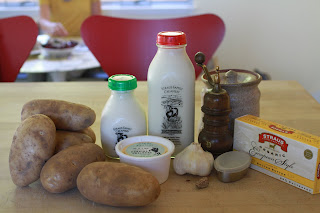 Bunburying allows you to share the pleasures of the table with your society of choice. When hosting company in your home, you need a menu. Creating a menu starts with a series of questions: What ingredients are in season? What is the weather? What is the weight of each dish? How will each dish compliment the others? Perhaps nothing pairs better with a roast chicken or leg of lamb than a gratin dauphinois. This classic gratin is easy to assemble and bake. It is a delicious comfort food.
What makes gratin dauphinois so good? Potatoes and cream. France’s Dauphiné region is famous for its butter, cream, milk and cheese. The culinary encyclopedia Larousse Gastronomique describes à la dauphinoise as a cooking method where “potatoes are cut into taillons (round slices) and placed with fresh cream in a gratin dish which has been rubbed with garlic and buttered.” From this base the variations (and disagreements) begin. Nutmeg is a common addition. Using cheese, such as a Swiss Gruyére or French Gruyére-style cheese is a subject of heated debate. You will find variations containing ingredients as diverse as thyme and curry powder.
I was drawn to the following recipe from Saveur, No. 53, for two reasons: it hews to the classic recipe and it bakes at 400°F. The first reason is a matter of preference, the second of convenience. I only have one oven and I look for dishes that I can bake together. A number of my favorite main dishes cook at 400°F, including Paul Bertolli’s Roast Chicken and an outstanding Roasted Fillet of Beef with Black Pepper. This gratin dauphinois perfectly compliments both.
Preheat oven to 400°F. Bring the milk and heavy cream just to a boil in a pot over medium-high heat. Meanwhile, grease a large baking dish with 1 tbsp. butter and scatter minced garlic over bottom. Thinly slice the potatoes. Arrange layers of slightly overlapping potato slices in dish, seasoning each layer with salt, pepper and nutmeg to taste. Spread crème fraîche over potatoes, then pour hot milk-cream mixture over potatoes and dot with 3 tbsp. butter. Bake until brown and bubbling, about 1 hour. Serves 8. 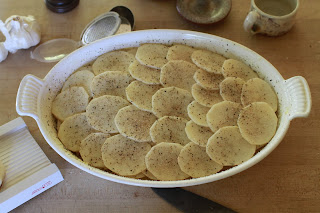 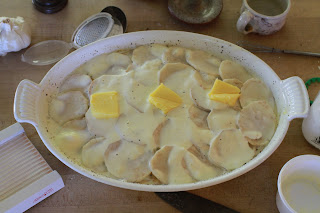 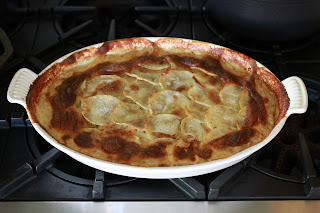 Some final thoughts. A mandolin is a helpful tool that speeds the preparation of this dish. And I found that choosing a slightly deeper baking dish helps to prevent the gratin from bubbling over and making an impressive, smoky mess in your oven. 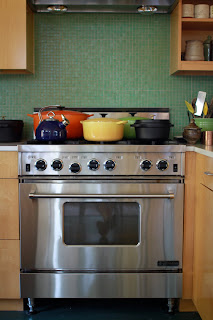 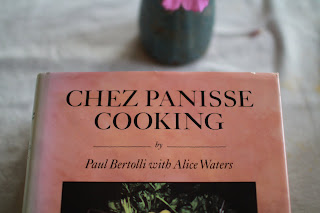 Bunburying afield has its pleasure, but Bunburying near one’s home affords its own rewards, especially if you live in Northern California’s San Francisco Bay Area. One such reward is dining at Chez Panisse. Established in 1971, Chez Panisse was born out of a desire to combine regional French recipes with fine California ingredients. (It should come as no surprise that Chez Panisse often fêtes Richard Olney.) The restaurant’s meticulous use of sustainable local ingredients is featured in its numerous cookbooks. My favorite Chez Panisse cookbook is Chez Panisse Cooking by Paul Bertolli with Alice Waters.

The recipes in Chez Panisse Cooking are remarkable in their range. The Meats and Poultry Section features a sophisticated dish of Pigeon Marinated in Muscat Wine along with a homey and comforting dish of Veal Meatballs with Artichokes, Tomatoes, Green Olives and Sage. Many of Chez Panisse Cooking’s recipes, especially a number of the “rustic” ones, deserve a place in a stable of recipes used to feed friends and family. Perhaps none more so than Bertolli’s recipe for roast chicken. It is a straightforward classic that is easily mastered.

Preheat the oven to 400ºF. Remove excess fat inside the cavity of the chicken and in the neck flap. Crack the fennel seeds in a mortar with a pestle and mix with the cayenne, salt and pepper. Salt the cavity and stuff the bunch of thyme inside. Truss the legs loosely so that all areas, particularly the inner thighs, are exposed to the heat. Turn the wings behind the neck of the bird and fix them in place. Use the remaining mixture of seasonings to salt the bird all over, particularly the breast section that is milder in flavor than the darker parts of the bird. Set the bird in a roasting pan without a rack, and cook it for 1 hour. Remove it from the oven and allow it to relax for 5 minutes before carving it. 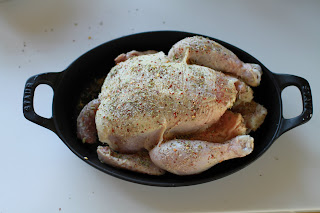 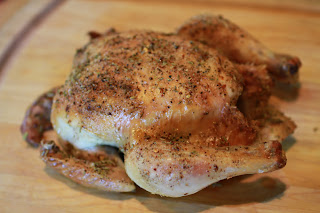 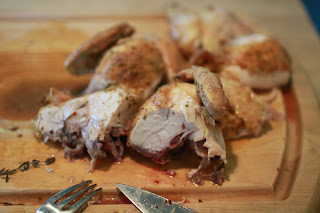 The success of this dish depends upon the quality of your chicken. A carefully raised pastured chicken is wonderful if available. If unavailable, consider using a kosher chicken, which is often available from good markets. Kosher chickens are a useful convenience and, to my taste, are better than run-of-the-mill free-range chickens. 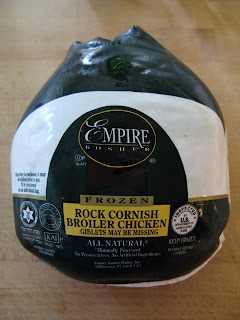 How to truss a chicken is an early cooking skill. In truth, I rarely employ this step in Bertolli’s recipe. What I love about his approach to roast chicken is its simplicity and trussing, although classically correct, seems to get in the way.


Another benefit of this recipe is its cooking temperature of 400. A complimentary gratin cooks at the same temperature. More on this delicious side dish to follow.
Posted by Steven Sharafian at 8:15 PM
Email ThisBlogThis!Share to TwitterShare to FacebookShare to Pinterest
Labels: Chez Panisse Cooking, Paul Bertolli, roast chicken
Newer Posts Older Posts Home
Subscribe to: Posts (Atom)