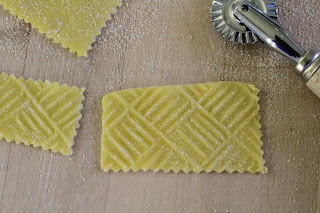 A cavarola is a carved wooden board used to make pasta. In Basilicata, a deeply ridged cavatelli called orecchie di prete is made by rolling a small cylinder of dough across a cavarola. The pasta’s plump, lobed shape resembles its namesake, priest’s ears. Head east into Puglia and you will find a completely different shape: a rectangular pasta that is made by pressing a flat piece of dough into a cavarola. The resulting shape is called stracenate.

Giuliano Bugialli in Bugialli on Pasta [1988] describes stracenate (also called stracnar) as “attractive pasta rectangles, which are patterned in herringbone with a suggestive antique board called a cavarola….” Bugialli continues: “some semolina is mixed in with white flour, but the pasta is rich with egg. This is another of those great old pastas that must be made manually and is disappearing, but let us work to revive it.”

That stracenate risks disappearing is lamentable. It is a handsome, ridged pasta that holds a range of sauces well. It is also one of the few traditional Southern Italian pastas made with a combination of wheat flours and eggs (as opposed to only durum-wheat flour and water). Yet Bugialli’s exhortation hints at a possible reason for stracenate’s possible demise. Although not difficult to make, stracenate takes a good deal of time. First you make a dough that you roll out to create a thin sheet of pasta; next you hand cut out tens of small rectangles; and finally, you individually press each piece of pasta onto a cavarola. 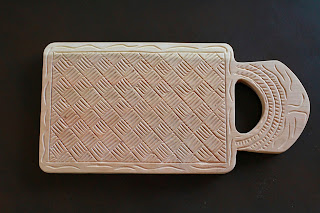 Here is the dough recipe that I use to make approximately 1 pound of stracenate. Variables such as temperature, humidity and variations in flour and eggs can affect pasta dough. You may need to slightly adjust the amount of flour or perhaps add a bit of water to correct your dough.


Making stracenate is similar to making pappardelle with the following differences: (1) mix the durum and tipo 00 flour together before sifting the flour; and (2) after rolling the dough through setting No. 6 (the penultimate setting on an Atlas 150), cut the sheet with a knife or fluted pastry wheel into rectangular pieces that are approximately 1-inch wide and 2¼-inches long. With the tips of your fingers or the heel of your palm, press each piece of pasta onto a cavarola to create the pasta’s distinctive herringbone pattern. Place the stracenate on baking sheets coated with course semolina flour to rest for approximately 1 hour before cooking. This brief drying period helps the pasta to retain its decorative pattern when cooked. 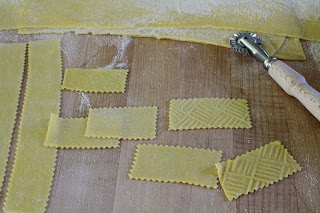 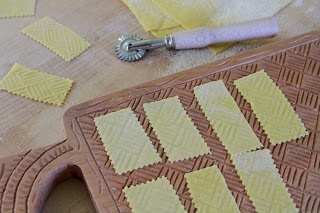 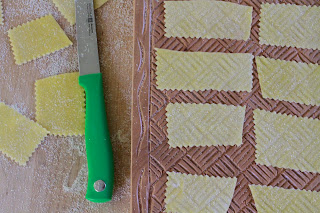 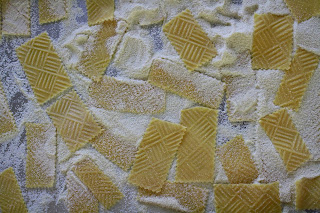 No doubt to Mr. Bugialli’s delight there is evidence that stracenate is making a comeback. The 2011 English translation of Monica Sartoni Cesari’s Italy Dish by Dish [2005] has the following entry in its section on Puglia and Basilicata for stracenate: “It’s…the name of [a] pasta shape that’s made with flour, lardo and water. The shapes are made by rolling rectangular pieces of dough using a ridged rectangular wooden utensil that leaves a pattern on the pasta.” Stracenate’s inclusion in this excellent resource guide bodes well for the pasta’s future. 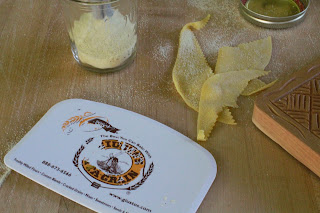 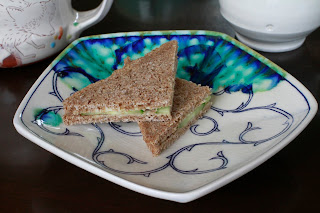 JACK: …Hallo! Why all these cups? Why cucumber sandwiches? Why such reckless extravagance in one so young?…
The Importance of Being Earnest

What better way to celebrate the first year of A Serious Bunburyist than with a cup of tea and a cucumber sandwich? And who better to consult on how to make a proper cucumber sandwich than a truly great food writer, Diana Kennedy. Many might think that Kennedy is a strange choice for this task given her close association with regional Mexican cuisine. But her self-proclaimed “rather traditional upbringing in England” makes her an ideal candidate. Kennedy shares a number of traditional British recipes, including a recipe for cucumber sandwiches, in her wonderfully eclectic cookbook Nothing Fancy – Recipes and Recollections of Soul-Satisfying Food [1984].

In Kennedy’s own words: “Nothing Fancy – Recipes and Recollections of Soul-Satisfying Food is just that, with a few fancy exceptions, of course. It is a collection of recipes that are, or have been at one time or another, part of my culinary life—favorite dishes that I love to eat and remember friends by.” The book’s chapters reflect the idiosyncratic nature of her work: Appetizers; Soups; Vegetables and Salads; Light Dishes; Cold Meats; Fish; Meats and Poultry; Yeast Breads; Desserts; Tea; Crispy Things; Drinks and Natural Remedies; Preserves; and Christmas.

Kennedy’s chapter on Tea is particularly informative and entertaining. She writes: “[t]ea is my panacea, my consolation—if you will, my ‘fix.’” Kennedy instructs on how to assemble a properly set tea tray for “ordinary (not high) tea”. A quick aside: a high tea is a rather hearty, early evening meal that typically includes cold meats, eggs, cheeses, and cakes. Kennedy’s “ordinary tea” is a full tea that is served after 3:00 in the afternoon and includes tea, scones, cakes and, for many, cucumber sandwiches.

What makes a good cucumber sandwich? Kennedy writes that the best are refreshing and crunchy. The bread should be thinly sliced and have a tough crumb. These slices are coated with salted butter to protect the sandwich from becoming soggy from the cucumbers. Here is Kennedy’s Cucumber Sandwich recipe. Her introduction is worth reading in its own right so I present it here along with her recipe.

“Commercially grown cucumbers in the United States have been a disaster: they are tough-skinned, over fertilized, and tasteless. To make matters worse, some misguided vegetable makeup artist has decided that they should be waxed—what a ridiculous waste of effort and money! But now many markets across the United States are carrying the more delicately flavored long, thin European-type cucumbers—the type that is always used in England. (They usually come in plastic shrink-wrap in the United States.) Of course, if you live near a country vegetable stand and can buy them freshly picked, better still. If the cucumbers have a trace of wax on them, they will have to be peeled; but if not, they should be scored lengthwise with the tines of a sharp fork. Leaving the skin on makes for a better flavor and texture, which is important to these sandwiches. The bread should be either white or whole wheat, salty and with a tough crumb—far too many breads are sweet and doughy and should be shunned for everything, but particularly sandwiches.

Score the cucumber lengthwise and cut into paper-thin slices. Put the slices in a bowl. Season with the salt, freshly ground pepper, and vinegar. Set aside while you cut the bread and butter it. (The bane of my existence when I was growing up—the bread was always falling apart as I attempted to butter it.)

Cut the end crust off a loaf of bread and lavishly butter the cut surface. Slice thin. Repeat until enough bread has been buttered and cut for the sandwiches. Drain the cucumbers a little, and put a thin layer between 2 slices of the bread. Trim off the crusts, if you wish—depending on how fancy you want to be—and cut into triangles or rectangles. (I personally dislike all those fancy little pinwheel things.) Eat very soon after making, as these sandwiches are apt to become soggy.” Makes 18 sandwiches. 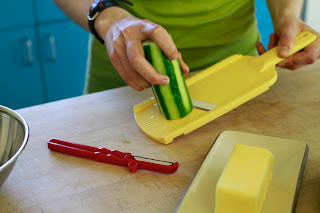 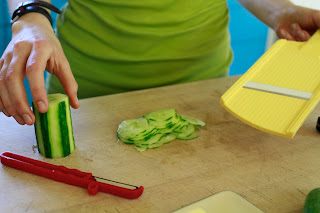 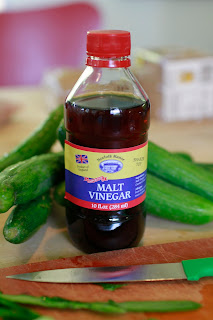 A few notes and comments. In my small corner of the world The Cucumber Problem has greatly improved. In a decent grocery store you can find good slicing cucumbers; in an exceptional grocery store and farmers market you will find Japanese, Persian and Armenian cucumbers. 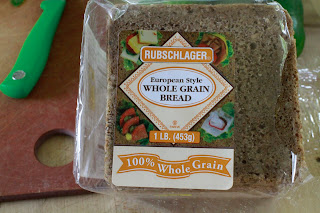 If you are using unsliced bread, Kennedy’s method of buttering and slicing the bread is brilliant. It works all the more easily if the butter becomes more than just “slightly softened.” However, I had a difficult time finding a suitable, unsliced loaf of bread; everything I tried was too soft. After a bit of experimentation I settled on a thinly sliced whole wheat bread baked by Rubschlager. I found this pre-sliced bread in the deli section of a local market.

In this first year of A Serious Bunburyist I have shared recipes from favorite cookbooks and discussed culinary tools that make cooking an even greater joy. In the coming year I plan to review more cookbooks, to delve deeper into Italian regional pasta and to feature posts by a few very special and talented guest Bunburyists. So until my dear and conveniently ill friend, Bunbury, explodes, I write on. 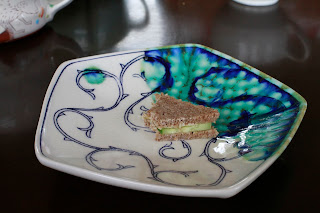