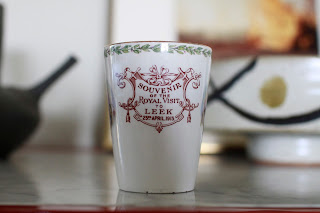 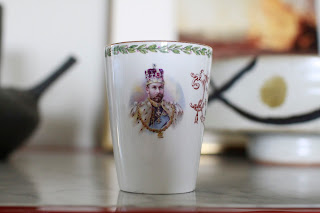 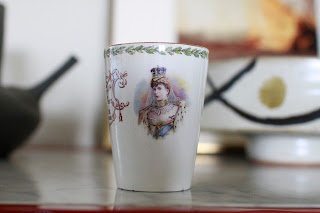 As my Dear Editor can attest, I have a great fondness for leeks. [Editor’s note: It’s true. He likes leeks.] One of my favorite leek recipes, Leeks Vinaigrette Mimosa, comes from The Complete Robuchon [2008] by Joël Robuchon and translated by Robin H.R. Bellinger. Mimosa refers to the dish’s hard-boiled egg garnish. Robuchon’s recipe serves 4.

1. Carefully wash the leek whites in warm water. Tie them into little bundles so the leaves don’t separate as they cook.

2. Bring 1½ quarts (1.5 liters) water and 1 tablespoon coarse salt to a boil and add the leeks. Cook 15-20 minutes, according to their size. (You can test to see whether they are cooked by pricking one in the middle with the tip of a knife. When it is cooked, the flesh of the leek should not resist the knife at all.) Set a rack over a plate. Remove the leeks with a skimmer and set them on the rack.

3. Separate the yolk and the white of the hard-boiled egg. Crumble the yolk with a fork. Crumble the white, either by mincing it or by pressing it through a strainer with not-too-fine a screen.

4. Using a fork, beat the vinegar with 2 pinches of salt. Add a pinch of pepper and the mustard and mix. Beat in the oil.

5. Arrange the still-warm leeks side by side on a plate and dress them with the vinaigrette. Shower them evenly with the crumbled egg, shallot, and herbs. 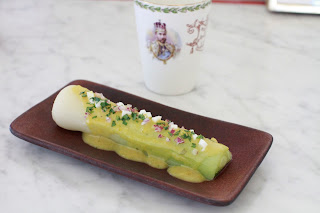 This classic, simple dish comes together quickly and is easy to make. The sweet, soft leeks and sharp mustard vinaigrette beautifully play off of each other. Serve Leeks Vinaigrette Mimosa with a roast chicken (here) together with potatoes and you have a great meal for family, friends or visiting royalty.
Posted by Steven Sharafian at 8:10 PM
Email ThisBlogThis!Share to TwitterShare to FacebookShare to Pinterest
Labels: Leeks Vinaigrette Mimosa 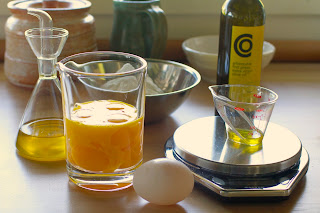 Earlier this week, my local butcher, Marin Sun Farms in Oakland, California, ran out of chicken eggs, but the shop had cartons of duck eggs. So, when life gives you duck eggs, make duck egg pasta. Each of the duck eggs weighed about 85 grams. For comparison, the United States Department of Agriculture grades a chicken egg weighing between 57 and 64 grams as large. 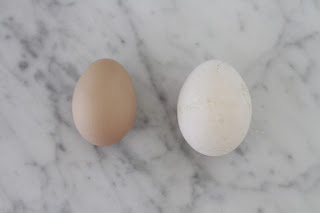 Although I have a few bigoli recipes that use duck eggs, I opted to follow an egg noodle recipe in SPQR [2012] by Shelley Lindgren and Matthew Accarrino with Kate Leahy. One of the best pasta cookbooks in my collection, SPQR lists ingredients by weight and volume. This made using the duck eggs a snap. Accarrino's egg noodle recipe calls for 250 grams 00 flour for 220 grams egg yolks (from 11 chicken eggs) and 5 grams of extra virgin olive oil. I weighed out the duck egg yolks and 7 yolks weighted 242 grams. I removed 22 grams of the yolks and I was ready to make my dough. Here is Accarrino’s recipe for egg noodles.

To make the egg noodles: In a stand mixer fitted with the paddle attachment, mix together the flour and salt. In a bowl, whisk together the egg yolks and olive oil. With the mixer running on low speed, drizzle in the egg-oil mixture. Mix the dough for 2 to 3 minutes, then turn onto the counter and knead by hand for several minutes; it should look bright yellow and feel firm. Flatten the dough into a rectangle, wrap in plastic wrap and leave on the counter for 30 minutes to soften and hydrate. 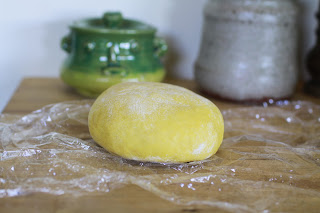 I divided my duck egg dough, which weighed about 463 grams, into two pieces; I used half the dough to make tagliarini and the other half to make corzetti stampati. SPQR’s egg noodle recipe worked well for both shapes. The duck egg pasta had a deep yellow color and a firm bite that characterizes egg yolk noodles. As for flavor, the pasta tasted rich but not appreciably different than noodles made with chicken egg yolks. 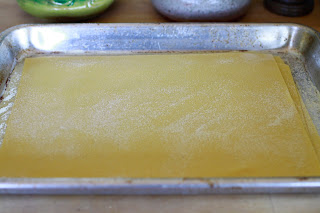 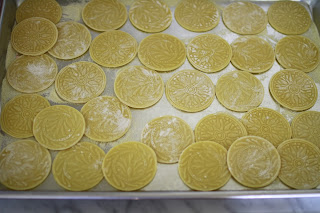 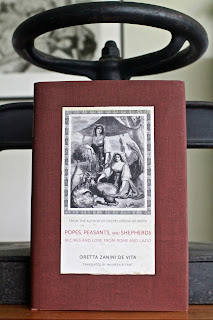 The University of California Press recently republished Popes, Peasants, and Shepherds – Recipes and Lore from Rome and Lazio (2013) by the great Italian food historian Oretta Zanini De Vita and translated by Maureen B. Fant. This book, originally published in 1994 in both English and Italian by Alphabyte Books, explores the Eternal City and its region’s gastronomic history and character. Although not cookbooks, both the original and the reworked and expanded editions include traditional regional recipes—nearly 250 recipes in the latest version—that compliment the author’s research. Like Zanini De Vita’s Encyclopedia of Pasta (2009), Popes, Peasants, and Shepherds will sate both scholars and lay readers interested in the food of Rome.

In Popes, Peasants, and Shepherds, Zanini De Vita explores the social history and geography that define cucina romanesca. Chapters include: The Agrarian Landscape of the Campagna Romana; The Tiber and Fish in Popular Cooking; Water and Aqueducts; Mills on the Tiber: Bread and Pasta in Rome; The Jewish Kitchen of the Roman Ghetto; The Papal Table; Hollywood on the Tiber; and Coastal Lazio and the Sea. The original version of the work interspersed recipes throughout its chapters; the revised edition collects all of the recipes in the book’s second half. These recipes fall into six categories: Primi piatti (First Courses); Secondi piatti (Main Dishes); Verdure e legumi (Vegetables and Legumes); Sfizi (Savories); Condimenti (Sauces and Condiments); and Dolci (Sweets).

Regular readers of A Serious Bunburyist might expect me to dive right into Popes, Peasants, and Shepherds’ pasta offerings, but first permit me to briefly digress. One of the many pleasures of Popes, Peasants, and Shepherds is Fant’s introduction to the book’s recipes entitled Thoughts on the Interpretation of Italian Recipes. As someone new to translating, I found her two-page discourse useful and entertaining. Consider this excerpt:

The verbs of Italian recipes can be delightful—you accommodate the fish in a pan, you moisten or bathe with wine—but, after a flirtation with this colorful vocabulary, I reverted to the prosaic “put” and “add.” I felt enough was being left to the imagination without having to worry about making the fish comfortable.

So now on to the pasta. Zanini De Vita supplies 28 recipes. Although all are traditional, none of these recipes would feel terribly out of place on today’s modern table. That said, if you want to make Rigatoni con la “pajata” (Rigatoni with Veal Intestines) you might have some trouble finding pajata, the “Roman name for the first section of the intestine of the milk-fed calf, used with its chyme.” Instead, you might consider another straightforward and simple recipe. One of my favorites is Spaghetti al pomodoro con le alici (Spaghetti with Tomatoes and Anchovies). This recipe serves 4.

Crush the garlic cloves and put them in a skillet with the chile and oil. Sauté over medium heat for a couple of minutes. Add the anchovies and cook until they are completely dissolved. Now add the tomatoes and cook the sauce over a lively flame for about 20 minutes, mashing the tomatoes with a folk as needed to break them up. Discard the garlic and chile.

Drop the spaghetti into about 4 quarts (4 liters) boiling salted water. When al dente, drain, transfer to a warmed serving bowl, and toss with the sauce. Serve immediately.

In addition to its recipes, Popes, Peasants, and Shepherds also contains an excellent Glossary of Terms and Ingredients. Its anchovy entry explains how to prepare the salt-packed version for cooking: “rinse off all the salt and divide the fish (which will be headless) into two fillets, discarding the skeleton.” No need to be afraid of salt-packed anchovies ever again. 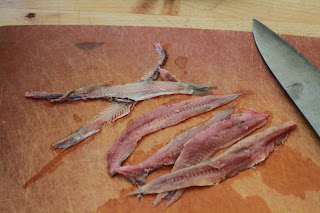 Warm thanks to the University of California Press for continuing to present Oretta Zanini De Vita’s work to an appreciative English-speaking audience. Happily, the Press plans to follow up Popes, Peasants, and Shepherds with the forthcoming Encyclopedia of Italian Pasta Sauces. I can scarcely recall the last time I heard such exciting news! 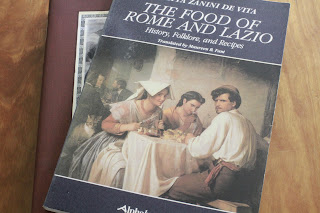