For the last nine years I’ve posted my picks for the best cookbooks of the year. With so many outstanding cookbooks published in 2019, I worked hard to winnow the worthy down to the five that I liked best. I present, in alphabetical order, my list.

Lavash: The bread that launched 1,000 meals, plus salads, stews, and other recipes from Armenia by Kate Leahy, John Lee and Ara Zada, Chronicle Books.

A little more about these books. 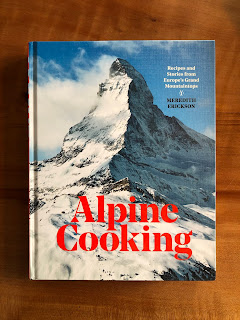 Alpine Cooking surveys the cuisine of the Italian, Austrian, Swiss and French Alps. Under Italy she shares recipes for Radicchio Dumplings, Piedmontese-Style Agnolotti and Ditalini with Fava Beans. In her Austrian chapter we learn how to make Pine Schnapps, a Spring Rhubarb Cocktail and Apricot Dumplings. The dish I most want to try in her Swiss section is Veal Stripes in Cream Sauce, Zürich-Style from the Zürich Via Bellevue Hotel in Gstaad. Desserts standout in the French Alps chapter, especially the recipes for a simple Savoie Cake and a not-so simple Polka Dot Paris-Brest. If you plan to travel in these alpine areas, Erickson shares her bar, hotel and restaurant recommendations. By far the most handsome book on this year’s list, I found myself transported by Christina Holmes’s exquisite photography. 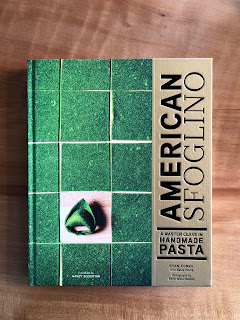 And speaking of photography, as I wrote here, American Sfoglino succeeds, in large part, because of Eric Wolfinger’s photographs. The trio of Funke, Parla and Wolfinger make hand-rolling a thin circular sheet of pasta (sfoglia) with a long rolling pin (mattarello) seem perfectly possible with both desire and practice. After covering the basics of creating pasta dough and sheets, Part 2 of the cookbook tells the reader how to transform la sfoglia into delicious Emilian pasta dishes. I applaud Chronicle Books for letting Funke dig deep into the disappearing craft of making la sfoglia. 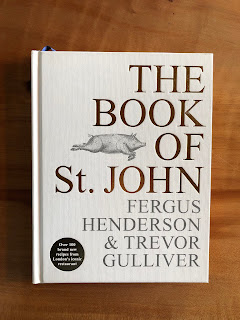 If asked to pick the most important cookbooks of the last 25 years, I’d confidently offer up Fergus Henderson’s Nose to Tail Eating. Henderson’s latest cookbook, The Book of St. John,“reflects a moment in time” in Henderson and Trevor Gulliver’s 25-year-old St. John restaurant. Henderson writes as well as he cooks. In the cookbook’s Introduction he shares that “[n]ose-to-tail means holistic eating. It is a way of being in the world…[it] is not about bravado and it should not be about ego; one should never forget that the point of a kitchen is to cook people their lunch, which they should enjoy.” Another quote: “It is no good for a chef to sleep under their oven; they should make like a whale, keeping their mouth and their mind wide open for the plankton of ideas, and they should spend time with their family.”  Food-wise, the book boasts that it contains 100 brand new recipes from London’s iconic restaurant. If you own Nose to Tail Eating and/or Beyond Nose to Tail, then The Book of St. John might strike you as quite familiar. So what! If you love Fergus Henderson’s other books, you will love this book, too. 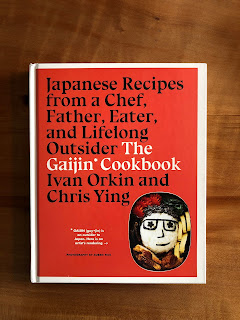 My pick for the best cookbook of 2019 goes to The Gaijin Cookbook. I own a lot of Japanese cookbooks, including a good number that cover Japanese comfort food/soul cooking/home-style recipes. Most of these books are very good. (I especially like Tokyo Cult Recipes by Maori Murota.) Orkin and Ying have penned an essential work for cooks interested in making comforting Japanese food. Since its fall release, I’ve cooked more than a dozen dishes from The Gaijian Cookbook ranging from Tonkatsu (Fried Pork Cutlets) to Ochazuke (Rice with Tea) to Kurimu Shichu (Chicken Cream Stew) to Gyudon (Beef and Onion Rice) to Gyoza (Japanese Dumplings). Another shout out to the photographer: Aubrie Pick’s images perfectly support Okin and Ying’s text and genial voice. 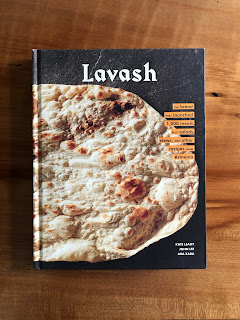 Armenian food occasionally plays a supporting role in cookbooks put out by major publishers. Naomi Duguid includes recipes from Armenia in her 2016 Taste of Persia. Olia Hercules scatters a few Armenian dishes in her two cookbooks, including her latest, Kaukasis. Lavash, however, is a genuine, one-hundred-percent Armenian cookbook. After teaching a food photography course at the TUMO Center for Creative Technologies in Armenia, John Lee returned to the states and shared his Armenian food experiences with Kate Leahy, a seriously talented food writer who helped author a number of excellent cookbooks (including one of my favorites, A16). Leahy and Lee hooked up with Ara Zada, a Southern California chef who also taught a workshop at TUMO, and Lavash represents the fruit of their partnership. In its introduction Leahy speaks to the culinary differences between historical “Western” and “Eastern” Armenia, the food traditions that Armenians carried with them during the diaspora, and the evolution of food in Armenia proper after the Armenian Genocide by the Ottoman Empire. I always wondered why the food from today’s Armenia rarely resembles the food that my Armenian grandparents and first-generation parents cooked in the San Francisco Bay Area. Leahy does a great job of explaining this in a way that makes historical and cultural sense. I plan on writing a full review of the cookbook in 2020, but I happily include Lavash on my best of 2019 list.

I want to conclude with a list of other outstanding cookbooks that I read in 2019. In no particular order, I recommend these books: Jubilee by Toni Tipton-Martin; South by Sean Brock; Soul by Todd Richards; My Mexico City Kitchen by Gabriela Cámara; Tu Casa Mi Casa by Enrique Olvera; Pasta Grannies by Vicky Bennison; The Turkish Cookbook by Musa Dagdeviren; The New Pie by Chris Taylor and Paul Arguin; and Food Artisans of Japan by Nancy Singleton Hachisu. If you like hunting for excellent Japanese ingredients, definitely check out Hachisu’s book.
Posted by Steven Sharafian at 10:40 AM
Email ThisBlogThis!Share to TwitterShare to FacebookShare to Pinterest
Labels: Cookbooks, Fergus Henderson
Newer Posts Older Posts Home
Subscribe to: Posts (Atom)