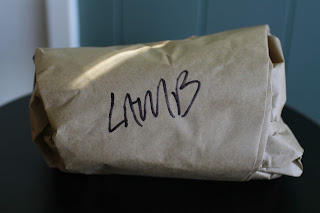 This is the third post in an ongoing series on Armenian food. I previously shared recipes for cherog, an Easter yeast bread, and for rice pilaf. Next up, a recipe for an Armenian lamb and green bean stew, or geragoor, from my paternal grandmother.

I grew up eating this dish at my grandparent’s house. Whether served alone as a weekday supper or as part of a more elaborate celebratory meal, the basic ingredients remained the same: lamb, a featured vegetable (usually green beans), onions and tomatoes. Growing up I thought this dish was exclusively Armenian; it is not. Many Mediterranean and Near Eastern countries have similar rustic lamb and vegetable stews with an onion and tomato base. Penelope Casas’s The Food & Wine of Spain [1983] has a recipe for Cordero al Chilindrón that pairs red peppers with lamb, onions and tomatoes. Richard Olney’s Provence, The Beautiful Cookbook [1993] shares a French version of this dish called Ragoût D’Agneau Aux Artichauts that contains artichokes. Paula Wolfert’s Mediterranean Grains and Greens [1998] includes a Tunisian variation that features cactus pads. Each version is a simply seasoned combination of a limited number of regional ingredients.

More often than not my grandmother made her geragoor with green beans. If she didn’t like her green grocer’s bean selection she’d opt for the vegetable that looked the best: leeks, squash or, my favorite, okra (bamia in Armenian). On a rare occasion she used potatoes in place of vegetables; when she did she seasoned the geragoor with dried purple basil. 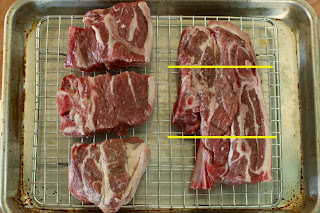 Although the stew’s vegetables might vary, its meat does not: my grandmother used lamb shoulder. I’ve tried the dish with leg of lamb and didn’t like the results; I think the leg is too lean for this dish. Although I sometimes cut cubes from a boneless shoulder, typically I use lamb shoulder blade chops cut widthwise into thirds. This recipe serves 4.


Heat oil in a heavy 5½-quart casserole over medium-high heat. Add lamb and brown meat. Add the sliced onions, season with salt and pepper, and cook until the onions soften. Add green beans and chopped tomatoes with their juice. Add a little water as necessary, but keep in mind that the onions, beans and tomatoes will give up liquids to form a sauce. After the stew comes to a simmer, cover the casserole and reduce heat to low. Simmer the stew for 45 minutes to 1 hour. Adjust seasonings to taste.

Some notes and thoughts. If using bone-in shoulder blade chops, be mindful that small (and often sharp) pieces of bone may turn up in the finished dish. Whenever I serve this dish I emphatically warn: “Look out for bones!”

When I have the time, I’ll salt the lamb the night before (using about 2 teaspoons of medium-grained sea salt) and leave the meat uncovered on a cooling rack inside the refrigerator. This step helps the lamb to brown and deepens the meat’s flavor. Make sure to cut back on the amount of salt when seasoning the stew to account for the well-salted meat. 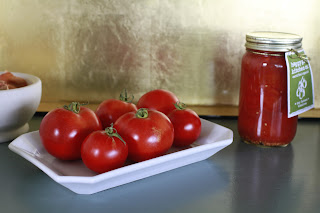 Don’t forgo this dish if tomatoes are not in season; good-quality canned tomatoes work nicely. The stew tastes different, but still extraordinarily good.

I began this series on Armenian food to memorialize certain family dishes that, through the passage of time, risked fading away. Ironically, often the simplest fare, like this geragoor, faces the greatest risk of being lost; past generations often fail to memorialize the simplest recipes. I can hear my grandmother now: “Why write it down, janig? It’s so simple?” Yes, it is simple. But wonderfully special in its simplicity and its ability to comfort, it’s a dish worth memorializing and saving.
Posted by Steven Sharafian at 6:13 PM
Email ThisBlogThis!Share to TwitterShare to FacebookShare to Pinterest
Labels: Armenian Geragoor, Geragoor
Newer Posts Older Posts Home
Subscribe to: Posts (Atom)