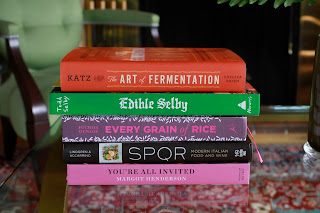 Every Grain of Rice by Fuchsia Dunlop. Bloomsbury Publishing.

So why these books?

The Art of Fermentation passionately examines fermented foods and beverages (e.g., pickles, meads, beers, wines, breads, and cheeses). Katz’s book inspired me to look beyond vinegar-based pickles and to explore a broad range of fermented vegetables. As I write, I have a jar of lacto-fermented okra in the refrigerator and two jars of sauerkraut bubbling away on my kitchen worktable. In response to Katz’s infectious enthusiasm, I even purchased an authentic onggi from Adam Field Pottery to try my hand at kimchi. It’s only a matter of time before I start in on mead and rice beer…

Some might argue that Todd Selby’s Edible Selby isn’t really a cookbook at all. (What is it then? A style, travel or design book?) I get inspired every time I flip through this visually stimulating work and want to rush into the kitchen and cook something. (Isn’t that what a good cookbook should do?) Does it contain recipes? Well…yes, some. But I don’t think anyone will buy this book for its recipes. (In fact, some are pretty much impossible to read.) Buy this book to enjoy Selby’s incredible eye, sense of style and playful creativity. Edible Selby profiles chefs, bakers and other culinary artisans, including a slew of my food and wine favorites: Arianna Occhipinti, an outstanding young Sicilian winemaker; Russell Moore, chef at Camino in Oakland, California; Chad Robertson and Elisabeth Prueitt (here) of Tartine Bakery in San Francisco. And there’s even a section on Margot Henderson (of You’re All Invited fame, below) and her husband, Fergus Henderson (here) of St. John in London. Cookbook or not, it makes my list.

In Every Grain of Rice, Fuchsia Dunlop focuses on Chinese home cooking and basic kitchen techniques. Her previous cookbooks, Land of Plenty and Revolutionary Chinese Cookbook, present recipes from the Sichuan and Hunan Provinces, respectively. Every Grain of Rice covers home-style dishes from these and other regions across China. If you want a primer on simple and comforting Chinese food, I highly recommend this excellent book. Do try Ms. Dunlop’s recipe for Silken Tofu with Pickled Mustard Greens. (And yes, you can pickle your own mustard greens. It is really easy.)

As a follow up to A16, an excellent 2008 cookbook that interprets Southern Italian cuisine, SPQR presents its take on Northern Italian food. Matthew Accarrino, the chef of San Francisco’s SPQR restaurant, joins Shelley Lindgren on this new book. Working from classic Northern Italy’s food—think Ragù Bolognese from Emilia-Romagna and Sardines in Saor from the Veneto—Accarrino offers his refined, modern (yet respectful) interpretation of traditional dishes using local ingredients. Lindgren expertly covers the wines of Northern Italy. As a subscriber to SPQR’s wine club, I can personally attest to her incredible taste. SPQR’s pasta dough recipes deserve special recognition.

Last but not least, You’re All Invited takes The Grand Prize as my favorite cookbook of 2012. This delightful book features recipes from Margot Henderson’s work as a caterer for Arnold & Henderson and restaurateur at London’s Rochelle Canteen. The book is subtitled “Margot’s Recipes for Entertaining” and who could ask for a more gracious host. I want to cook everything in this brilliant work. I keep coming back to a couple of recipes in particular: Bacon and Egg Pie, which she describes as “an old school pie from New Zealand”; and Sausages and Parsley Liquor, a braise of naked (i.e., peeled) sausages served with mashed potatoes. Need to serve 4, 10, 20 or 30? Not a problem! Ms. Henderson has graciously scaled many of the recipes in her book. Perhaps the before and after photographs that grace the front and back of the book’s slipcover encapsulate the spirit of this collection: comfortably gracious and charmingly playful. Buy this cookbook!

If you decide to add any of the above books to your collection or to give them to friends or family during these holidays, please do consider buying your copies from a friendly, independent bookseller. If we don’t support them, they might just disappear! And where would we be then?!
Posted by Steven Sharafian at 12:24 PM
Email ThisBlogThis!Share to TwitterShare to FacebookShare to Pinterest
Labels: Cookbooks, Margot Henderson 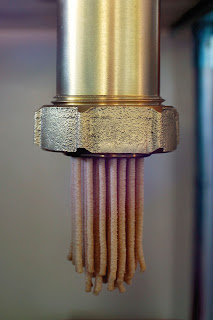 Since my first post on making fresh bigoli (here), I’ve expanded my collection of bigoli dough recipes. These recipes come from both classic Italian cookbooks (such as Ada Boni’s Italian Regional Cooking [1969] and Giuliano Bugialli’s Bugialli on Pasta [1988]) and from new cookbooks (such as The Italian Academy of Cuisine’s La Cucina – The Regional Cooking of Italy [2009] and Caz Hildebrand and Jacob Kenedy’s The Geometry of Pasta [2010]). Still, recipes for fresh bigoli remain rare in English-language cookbooks. My hope is that as the cooking public’s interest in Italian regional cuisine, especially pasta, continues to climb, and as the Internet makes the previously hard-to-find torchio pasta press readily available (here), we will see more recipes for fresh bigoli in new cookbooks.

And why not? Making fresh bigoli offers a number of advantages over buying dried bigoli—if you can find it—or using dry, whole-wheat spaghetti. Fresh bigoli has a firm yet chewy texture missing from dried pasta. Making bigoli also gives you complete control over how your pasta tastes.

Given that variations abound in regional Italian cooking, it’s hardly surprising that the bigoli recipes I’ve collected contain a broad range of flour options. Ada Boni’s recipe for fresh bigoli in her Italian Regional Cooking calls exclusively for “all-purpose (plain) flour”. (The Italian Academy of Cuisine’s recipe in La Cucina’s also calls for 100% all-purpose flour.) Oretta Zanini De Vita’s Encyclopedia of Pasta describes bigoli’s ingredients as “[g]enerally whole-wheat flour made from durum wheat, but sometimes soft-wheat flour….”   Jacob Kenedy’s bigoli recipe in The Geometry of Pasta has two variations: one with 100% whole-wheat flour (for the “staunch traditionalist”) and another with whole-wheat and a little added semola.  The Italian-language La Pasta [2010] from Slow Food Editore contains seven recipes for fresh bigoli using a range of farina di frumento (wheat flour) from tipo 00 (highly refined flour) to farina integrale (ground whole-grain flour). What can you take from this? Unless you’re a “staunch traditionalist” or just a dogmatist, experiment freely and use whatever flour option tastes best to you. 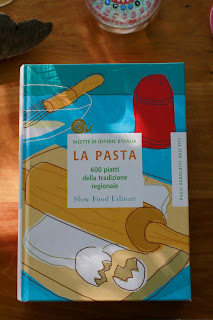 I’ve tried a number of different ratios of whole-wheat to all-purpose flour to achieve a pasta that meets my taste. I hit upon the following dough recipe for bigoli because it has a distinctive yet balanced whole-wheat flavor. When processed through my Bottene torchio the dough transforms into a rough-textured noodle characteristic of pasta extruded from a bronze die. The following recipe serves 2.


1. Weigh out the flour, mix them together and sift the flour blend into a heavy mixing bowl.

2. Make a well in the flour and add the eggs. Beat the eggs with a fork and incorporate them into the flour with the fork until a crumbly mixture forms. Clean the dough off your fork and add it to the bowl.

3. Holding the bowl with one hand, reach into the bowl with your other hand and continue to mix the dough by hand. The goal is to incorporate all of the flour in the bowl into a rough dough that holds together. (If this mixture is too dry and will not come together, add a quick spritz or two of water from a spray bottle.)

4. Turn your dough onto a clean work surface. Wash your hands to remove any dough before kneading.

5. Begin to knead the dough ball by forcefully pushing it down and away from you with your palm’s heel. Fold the dough back over itself toward you. Slightly turn the dough counterclockwise, and knead again. Knead until the dough becomes quite firm (generally between 10 to 12 minutes). The dough should weigh approximately 300 grams.

6. Wrap the dough in plastic. Let the dough rest at room temperature for about 20 minutes.

7. Attach your torchio to a work surface and insert your bigoli die. Unwrap the dough and lightly dust it with flour. Roll the dough into a thick cylinder and slide this into the torchio’s chamber. Insert the torchio’s piston into the machine’s chamber and turn the torchio’s handle until the pasta extrudes from the die. Cut to your desired length—I aim for 12 inches—and dust the cut pasta in a bowl containing flour to prevent sticking. Place the floured bigoli on a dishtowel. Continue turning the torchio handle and cutting until the dough runs out.

To cook the pasta bring a large pot of salted water to the boil. Add the fresh bigoli, stir the pasta and when the water returns to the boil, cook for approximately 3 minutes. Taste to see if the pasta is ready. If so, drain and add the bigoli to your ready sauce and continue to cook for a minute or two so the pasta and sauce can marry. 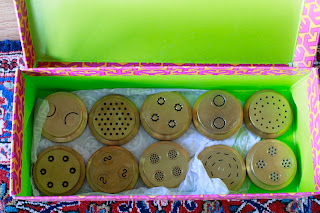 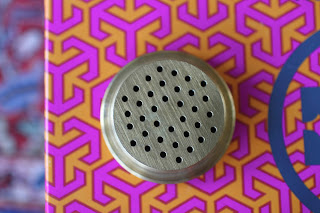 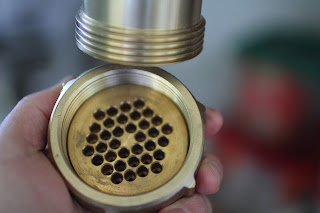 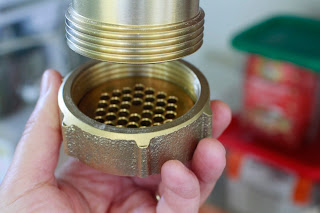 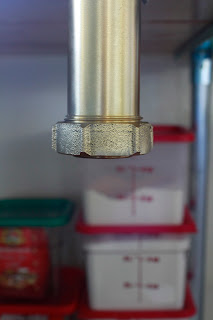 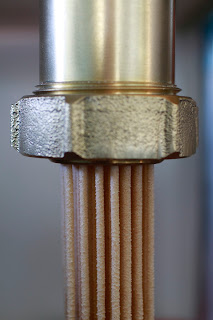 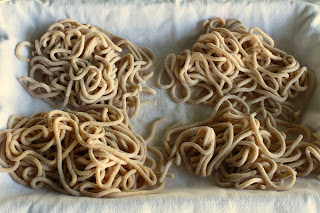 And what sauce should you have ready? That’s entirely up to your taste. Most bigoli dishes in English-language cookbooks serve the pasta in either a duck (in some form: broth, meat and/or giblets) or a salted anchovy sauce. Oretta Zanini De Vita writes that in Padova bigoli is traditionally served with chicken giblets. The Italian-language La Pasta from Slow Food Editore pairs bigoli with regional sauces that feature: brined lake bleak; salted sardines; uncured freshwater sardines; goose; duck; and a ragù made with a pork mixture used to stuff a salumi. 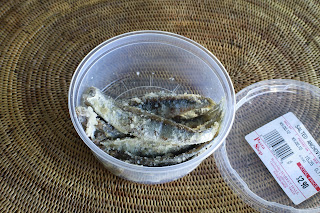