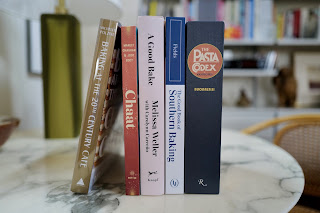 What a year. Maybe we—and when I say “we”, I mean The Whole World—can dare to hope for a safe, sane and boring 2021. We shall see. In the meantime, I carry on with my routines, which include sharing my year-end picks for 2020’s five best cookbooks. In alphabetical order, here’s my list.

Chaat; Recipes from the Kitchens, Markets and Railways of India by Maneet Chauhan and Jody Eddy, Clarkson Potter.

A Good Bake; The Art and Science of Making Perfect Pastries, Cakes, Cookies, Pies, and Breads at Home by Melissa Weller with Carolynn Carreño, Knopf.

Why did I pick these cookbooks?

I bought my copy of Maneet Chauhan’s Chaat from Spicewalla, an awesome spice merchant located in Asheville, North Carolina. Chauhan defines chaat as “…the iconic snacks of Indian cuisine. A literal translation of the Hindi word chaat is ‘to lick,’ and chaat have therefore come to describe almost anything that is so good you find yourself licking the palm leaf or banana leaf that it was served on.” Chauhan organizes her cookbook by dividing India into compass points. Under the chapter entitled “The North”, she includes a recipe for Green Chutney made with pan roasted chana dal, that tastes bright, hot, minty, smoky and delicious. Chauhan often ties her recipes to stops along India’s railroad lines. For example, her introduction to a recipe for Ros Omelette (Omelet with Tomato Gravy) begins: “Upon disembarking from the train and entering the Vasco da Gama train station, the ros omelette prepared near the station entrance are too enticing to pass up. The aroma of the omelet begins to waft through the air from the vendor stalls throughout Goa when the sun begins to set and doesn’t stop until well after midnight, after the tourists and locals alike have satisfied their cravings.” Chauhan has penned a unique, entertaining guide to authentic Indian comfort food.

Melissa Weller’s A Good Bake gets my nod as the best cookbook of 2020. Weller, who served as head baker at Roberta’s in Brooklyn and at Thomas Keller’s Per Se and Bouchon Bakery in NYC, brings her professional expertise to this thick, well-organized cookbook. I particularly like her eclectic mix of recipes. The Savory Bread chapter includes two recipes for Khachapuri, a traditional yeasted flatbread from Eurasian Georgia, and recipes for Hot Dog Buns and Soft Pretzels. In the Laminated Pastries chapter, Weller shares recipes for Salted Caramel Sticky Buns, Kouign Amann and New York Cheese Danishes. The first recipe I tried, Spelt Bull’s-Eye Scones with Raspberry Jam, turned out tender and flavorful. My family baked Weller’s Sweet Potato Pie for Thanksgiving. The pie had a creamy and light—yet not too soft—texture.  Weller uses orange juice and zest to brighten a perfectly-spiced, rich Garnet yam filling. What a great tasting holiday (or breakfast) pie!

I prefer cookbooks that use metric weights rather than volume measurements, especially in baking recipes. So when I received Kelly Fields’s The Good Book of Southern Baking, I felt a little letdown because Fields only includes volume measurements. I know: Millions of glorious bakers got on and get on perfectly well with teaspoons, tablespoons and cups. I, however, generally value precision over tradition. But once I started flipping through Fields’s cookbook, her recipes won me over. She includes classics, like cornbread baked in a cast-iron skillet, and more modern bakes like a Glazed Lemon-Cornmeal Cake that is both simple to make and delicious.  Fields shares her secrets for making great biscuits in her Baker’s Biscuits recipe, then goes on to include six other biscuit variations: Rolled; Angel; Drop; Beaten; Sweet Potato; and, finally, Dog Biscuits. If you like hand pies, The Good Book of Southern Baking contains recipes for three different types of hand pies (blueberry, apple, and strawberry-rhubarb) and for peach turnovers (plus cheese turnovers!).

I wrote about The Pasta Codex (here). In a nutshell: Published in Italy in 1973, the Codex contains 1,001 pasta recipes collected by the late Vincenzo Buonassisi, a lawyer, journalist and passionate food writer who authored over 40 cookbooks. Natalie Danford translated Buonassisi’s tome into English for Rizzoli, a publishing house that excels at bringing important Italian cookbooks to an English-speaking audience. If you love Italian cooking, especially pasta, I highly recommend Buonassisi’s The Pasta Codex.

What looks exciting in 2021, cookbook-wise? I already placed my pre-order for Brandon Jew’s Mister Jiu’s in Chinatown. Tom Kerridge’s The Hand and the Flowers arrives Stateside in the first part of the year. Eric Ripert’s Vegetable Simple comes out in April. And, hopefully, the pasta fairies will sprinkle some magic Tipo 00 flour on us and we will enjoy one or two good pasta-centric cookbooks. Rachel Roddy's An A-Z of Pasta looks promising. I hear from my grapevine that another good pasta cookbook might arrive in 2021.

And, of course, here’s really hoping that 2021 offers us a respite from the dangerous craziness of 2020. Stay safe and well, everyone! 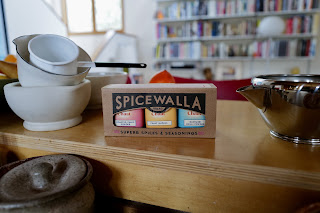 Posted by Steven Sharafian at 12:30 PM
Email ThisBlogThis!Share to TwitterShare to FacebookShare to Pinterest
Labels: Cookbooks 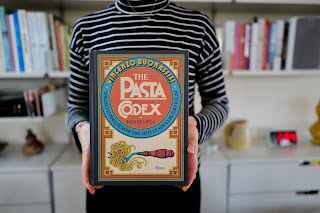 Rizzoli just published The Pasta Codex, an English-language version of Vincenzo Buonassisi’s 1973 cookbook Il Codice della Pasta. Like the Italian original, this new translation contains 1,001 pasta recipes. Buonassisi writes: “The main purpose of this book…is a practical one: to collect recipes that can be used every day to enjoy variety on a single theme.”

In her Translator’s Note, Natalie Danford writes that The Pasta Codex “is a book representative not only of Italy, but an Italy of a particular time, namely the early 1970’s.”  Perhaps because the Codex primarily memorializes timeless Italian pasta dishes, the 47-year-old cookbook still feels fresh and relevant, save for a few curious standouts. A classic recipe for Cappelletti in Brodo follows an offbeat Tagliatelle with Chicken, Apple, and Banana. Buonassisi includes another recipe called Pasta with Bananas: fried bananas topped with grated sharp cheese and crushed red pepper flakes.

Within each chapter “…there is a progression from simple dishes to the more complex.” The chapter on pasta with fish opens with Pasta with Anchovies. Buonassisi writes “[t]his humble dish is simply delicious.” It’s also extremely simple to make: dissolve salt-cured anchovy fillets in warm olive oil, add chopped parsley, and toss with cooked pasta. His Pasta with Fish chapter ends with “Zembi d’Arziglio” con Salsa di Arselle (Branzino-filled Half-Moons in Wedge Clam Sauce). Buonassisi introduces the recipe like this: “Teresa and Emanuele Viacava of Nervi won the Agnolotto d’Oro prize in Turin with this recipe. Zembi is a reference to the shape of the pasta, while arziglio is the foamy seawater that beats against the shoal.”

Given my website’s torchio-centric focus, I want to end this post with a bigoli recipe from The Pasta Codex. Buonassisi includes nine different bigoli and sauce pairings. Entry No. 932, Bigoli with Pork and Veal Sauce, introduces the pasta’s shape and serves as a nice example of Buonassisi’s prose. Disclosure: I have not made this dish yet (because my vegetarian daughter came home for the holidays).

7 ounces tomatoes, peeled, seeded, and cut into strips or minced

Bigoli are a renowned homemade pasta from the Veneto, similar to spaghetti, but made with a special press and traditionally made with buckwheat flour, though recently whole wheat bigoli have become very popular. If you have a bigoli press, make a dough with the buckwheat or whole wheat flour, the eggs, the melted butter, and as much milk as needed to make a firm dough. Process with the press to extrude bigoli. You can also purchase bigoli, either fresh or dried. If you are making your own, let them dry at room temperature for several hours before proceeding. For the sauce, in an earthenware pot off the heat, combine the pork and veal, the tomatoes, and 2 tablespoons of broth and season with salt, pepper, and nutmeg. Bring to a boil, then cover, lower the heat, and simmer for 1 hour, adding more broth if the sauce gets too thick. Meanwhile, in a saucepan, heat the oil and sauté the onion, carrot, celery, and basil. Season with salt and when the mixture is golden, add to the tomato mixture and cook, stirring frequently, to combine. Cook the pasta in salted boiling water, drain, and top with the sauce. Serve with grated Parmigiano on the side.

Variation If you cannot find bigoli, use spaghetti or another type of dried pasta.

Given Buonassisi unprejudiced palate, it’s no surprise that his Codex advocates a decidedly open-minded approach to substituting one type of pasta for another. In his Introduction to The Pasta Codex, Buonassisi writes that the “golden rule is that pasta is largely interchangeable.” Compare Buonassisi’s flexibility with the (somewhat) tongue-in-cheek dogma of Sauces & Shapes: Pasta the Italian Way by Oretta Zanini De Vita and Maureen B. Fant: “‘Live and let Live’” does not apply to the service and consumption of Italian pasta….”

Buonassisi’s bigoli pasta dough recipe reminds me of what I uncovered in my bigoli research more than 10 years ago when I purchased my new torchio pasta press. Most of the recipes I found include eggs, milk and butter. Often flour selection differentiated the recipes with some calling for all-purpose, others for whole wheat, and a few for buckwheat flour.

I really like The Pasta Codex and highly recommend it to anyone interested in Italian cooking. Rizzoli deserves warm praise for bringing English translations of essential Italian-language cookbooks, such as Vincenzo Buonassisi’s The Pasta Codex, to a wider audience.