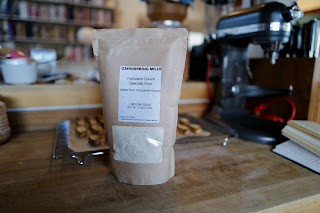 Fortissimo is a very hard variety of durum wheat. Cairnspring claims that during its early milling trials, the wheat broke its mill stones. Durum’s protein content can range from 9 to 18%. Fortissimo has a protein level between 10-11.5%, which is just a tick below average. Cairnspring mills and then sifts its Fortissimo to a Type 90 flour, which has slightly more texture than Central Milling’s Extra Fancy Durum. Neither Cairnspring’s Fortissimo nor Central Milling’s Extra Fancy Durum flour resemble traditional semolina, which is a granular flour composed of evenly sized endosperm. 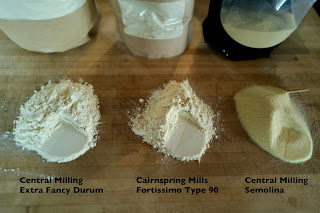 When I first came across Fortissimo on Cairnspring’s website, the mill only had 50-pound bags of the durum available for pick-up in Burlington. As I write, Cairnspring now offers 2.2-pound bags that it will ship (but, per the website, supplies are limited).

I’ve made a number of batches of pasta blending 60 grams of Cairnspring’s Fortissimo durum with 90 grams of Central Milling’s Organic Type 00 flour. To hydrate the flour, I add one whole egg and two egg yolks, which together weigh just under 100 grams. Using a standing mixer fitted with a paddle attachment, I slowly add the egg mixture to the flour blend until the dough just comes together. I then tightly wrap the dough in plastic film and let it hydrate at room temperature for 30 minutes before rolling the dough out in my Imperia R220. I plan on using the same flour blend to extrude pasta with my torchio, but will cut back on the amount of the egg mixture to make a harder dough. 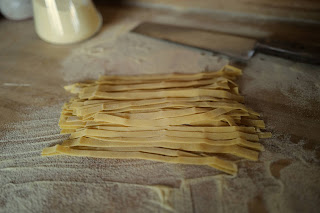 I try to support my local Pacific Northwest food industry, especially newer ventures like Cairnspring Mills, which started in 2016. Its Fortissimo durum flour feels like the freshly milled and sifted flour that I grind with my Komo grain mill. The pasta I made with Fortissimo using my preferred 2:3 ratio of durum to Type 00 flour had a balanced, firm texture and lovely yellow hue. Although not traditional, I especially like to use this 2:3 flour blend when making pappardelle destined for a hearty sauce.
Posted by Steven Sharafian at 12:38 PM
Email ThisBlogThis!Share to TwitterShare to FacebookShare to Pinterest
Labels: Making fresh pasta, Milling pasta flour, Pasta ingredients
Newer Posts Older Posts Home
Subscribe to: Posts (Atom)