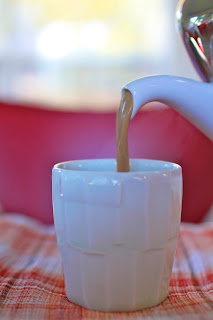 Please welcome this site’s second guest Bunburyist. She is a scholar, world traveler and great humanitarian.

Namaste, fellow Bunburyists! I am recently returned from India, where I spent ten weeks dodging rickshaws, haggling with street vendors, and eating my way through an unimaginably rich and flavorful national menu! While traveling, food was an important way for me to connect with Indian culture, and as it has the added advantage of being incredibly delicious, I spent a good amount of my time in and about the Indian kitchen. I should add that when one is in India, exploring the food doesn’t take much effort. Rather, it kind of comes at you with incessant zeal: grilled masala corn hawked aggressively from the street corner; ripe mangos and coconuts raining down from laden trees; and sari-d Aunties pressing more and more chapattis and curries on you from their kitchens, deaf to your mild protests and blind to your bulging stomach. The Indians love their food, but what they love even more is to give it away.

And perhaps nothing is more inescapable in India than masala chai. During my first 24 hours in India, I had chai (to my best estimation) four times. It is, quite simply, everywhere. One sees chai cooked on the corner of every street, where it’s prepared in huge pots by men called chai wallahs (literally, tea guys), who ladle out small glasses of it to crowds of thirsty Indians for 3-5 rupees a glass (about $0.10). It’s also hawked by men carrying tin thermoses of it onto trains, around bus stations, and from stand to stand of vegetable and fruit vendors. For its omnipresence in the Indian lifestyle, and for the enthusiasm with which the Indians take their tea, I had assumed that chai had always been a part of that ancient Indian culture. So I was surprised to find in my recent Internet perusing that chai is, rather, a comparative newcomer to the subcontinent.

In fact, though tea plants have grown wild in India for millennia, their use in ancient times was purely medicinal; tea wasn’t widely farmed until the British East India Company took over production in the 19th century. By 1900, fifty percent of Britain’s substantial national tea intake (one pound, per person, per year) was provided by India. The colony was certainly doing its part to keep England well watered. However, tea consumption within India remained low until the early 20th century when an aggressive promotional campaign launched by the British-based Indian Tea Association introduced the Indian worker to chai. The official promotional tea served by the Tea Association was made in the British style, with milk and sugar, a quirk in the recipe that has survived the days of colonialism and now exists as the Indian tea-drinking standard.

When my Dear Uncle wrote to me asking if I might bring back a recipe for real Indian chai, I was thrilled. First, because I was excited to have a reason and a motivation to discover an authentic  recipe, so I wouldn’t have to give up chai when I got home; secondly, because I loved the thought that I could share such a central part of Indian culture with my many fellow Bunburyists; and thirdly, because chai is wonderfully simple to make, a characteristic that, if it were possible, endears the drink to me even more.

I would like to add that there are as many chai recipes as there are Indian cooks; every family has their own variation, and you should feel free to adjust the recipe below to make it your own. This particular recipe and the cooking lesson that accompanied it were the generous gifts of Ranjana, the wonderful Indian Auntie who graciously took me in during my stay in Mumbai and gave me my enduring love of Indian food.

To make two cups of chai, use the ingredients below:

Begin by grinding the cardamom and cinnamon (along with the ginger and/or black pepper if you choose to use them) with a mortar and pestle. No need to reduce the ingredients to a powder; just crush them enough to help the spices to infuse the tea water.

Bring the water to a boil. Add the crushed spices to the water, along with the tea powder. Reduce the heat and simmer for at least five minutes.

Add the milk and bring the tea back to a boil. Reduce the heat and allow the milk to simmer and cook down for at least five minutes. You should be able to see a milk skin on the top of the tea.

Serve immediately, pouring the tea into cups or a teapot through a strainer to catch the spent tea and spices. Add sugar to taste. (The chai I had in India was typically quite sweet.) 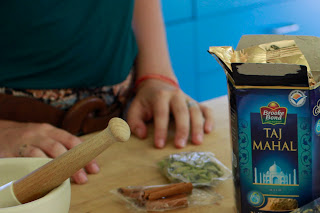 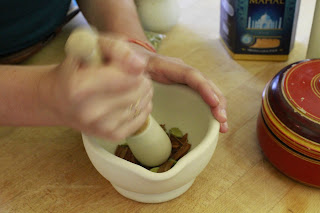 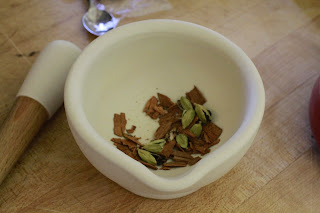 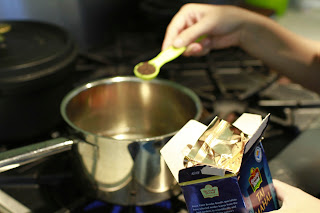 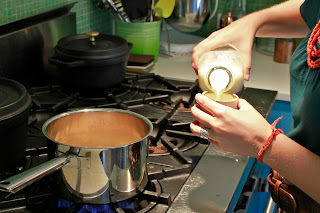 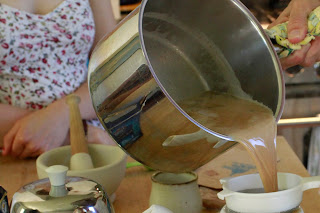 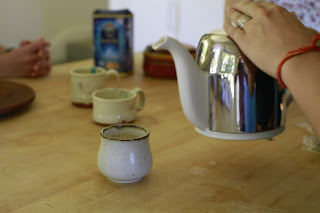 Chai is traditionally served in small cups (about ¼ cup per serving). This recipe allows for much larger servings, as I’ve found that I’m rarely satisfied with so little chai.