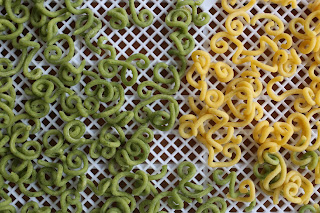 Leafing through Michael White’s Classico e Moderno (Random House, 2013), I came across a version of Gramigna con salsiccia that caught my attention. In the recipe’s introduction, White writes: “Befitting its name, “little weeds,” gramigna is made both in yellow and green versions, the latter with a spinach dough, often served together.” The idea of a paglia e fieno (“straw and hay”) version of gramigna intrigued me. Authentic? I pulled my copy of Oretta Zanini De Vita’s Encyclopedia of Pasta (University of California Press, 2009) off the shelf and looked up gramigna. Sure enough, Zanini De Vita covers the straw and hay variation: “The factory-made version varies from small to medium size, in the shape of a tiny worm, and is often found in a paglia e fieno version.” I posted an egg dough version of gramigna (here), but never attempted a green pasta dough for the torchio. No time like the present.

I developed the following green dough recipe using spinach, but nettles, basil, parsley, kale or Swiss chard should also work. In Essentials of Classic Italian Cooking (Knopf, 1992), Marcella Hazen advocates finely chopping blanched then well-dried spinach “with a knife, but not in a food processor which draws out too much moisture.” Giuliano Bugialli, in his updated The Fine Art of Italian Cooking (Random House, 1989) also makes his green dough with finely chopped spinach. In Cooking by Hand (Potter, 2003), Paul Bertolli makes his green pasta with a purée of spinach or young nettles using either a mortar and pestle or a food processor. I experimented with puréed, finely chopped and pounded spinach. Each type worked just fine. Pasta made with puréed spinach looks uniformly green. Finely chopped spinach produced a slightly lighter, speckled green pasta. 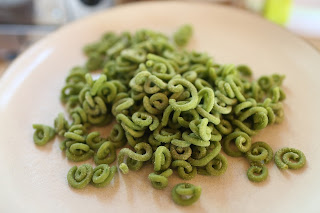 1. Wash the stemmed spinach leaves—multiple times if necessary—to completely remove any dirt and grit. Bring a sauce pan of salted water to a boil. Cook the spinach for a minute or two. Transfer the spinach into a bowl of cold salted water. Once the spinach cools, remove it and drain well. Squeeze the spinach until it is mostly dry. Purée the blanched spinach with a food processor or immersion blender. Alternatively, finely chop the spinach with a knife. Put aside 17 grams (approximately 1 tablespoon) of puréed spinach to make the pasta dough. Use the remaining spinach in another dish so as not to be wasteful.

2. Sift the flours into the bowl of a stand mixer. Add the salt. Using a paddle attachment, mix together the flours and salt.
3. Place a mixing glass on a scale. Tare the scale and crack a medium-sized egg into the glass. The white and yolk should weigh approximately 50 grams, give or take. Crack another egg and add its yolk to the mixing glass, bringing the weight of the eggs to somewhere around 70 grams or so. Add the 17 grams of spinach purée to the eggs. The goal is to create an egg and spinach solution that weighs 91 grams. If the mixture weighs less than 91 grams, then add water to bring the weight up to 91 grams. If the mixture weighs more than 91 grams, remove the overage and reserve in case you need more liquid to make the dough. Use a hand whisk to beat the egg and spinach mixture.
4. With the stand mixer running on low speed, slowly pour the egg and spinach mixture into the mixing bowl in small batches. After adding all of the egg and spinach mixture, continue to mix the dough for about 2 to 3 minutes. You may need to add a little bit more liquid to create a dough with the proper consistency. The dough should look clumpy (see following photo). The finished dough should hold together when squeezed. 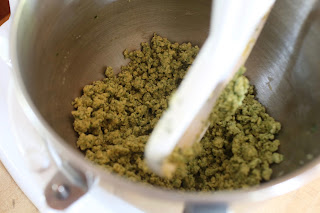 5. Remove the bowl from the mixer and add any dough on the paddle to the mixing bowl. Using your hand, bring the dough together into a large ball in the mixing bowl. Knead the dough in the bowl or on a work surface for approximately 30 seconds. Don’t worry if the dough feels hard and is difficult to knead. The dough will soften as it rests. Form the dough into a log narrow enough to ultimately slide into the torchio’s chamber. Tightly wrap the dough in plastic and let it rest at room temperature for 30 minutes. After 30 minutes, insert the dough into the torchio and crank away! After extruding, let the pasta dry at room temperature for a couple of hours. 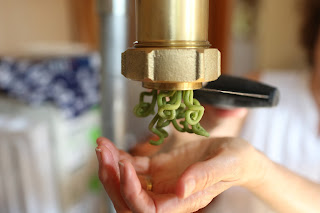 A few notes and observations. I use a flour mixture containing 50% extra fancy durum flour in order to add strength to the dough. I worried that the spinach purée might compromise the dough’s plasticity without the benefit of the durum flour’s extra gluten. I like how the 50/50 flour blend performed and tasted.
To make my yellow “straw” pasta, I created another 250 grams of egg dough sans spinach. I used the same 50/50 flour blend adding cream and extra egg whites in place of the spinach purée. Together the green and yellow pasta weighed 500 grams—just over a pound—serving 4 to 6 depending upon appetites. 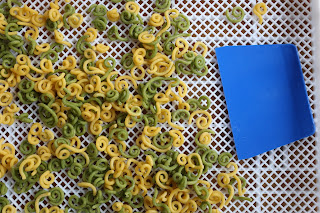 I tried my paglia e fieno gramigna with a number of different white sauces. I made a cabbage and sausage sauce from a recipe in Caz Hildebrand and Jacob Kenedy’s The Geometry of Pasta (Boxtree, 2010). Kenedy braises sausage and cabbage in equal parts chicken stock and milk creating a sauce that tastes rich without being heavy.
My favorite sauce turned out to be a variation of Gramigna al ragù di salsiccia (here) wherein I switched out the tomato purée for a milk/chicken stock mixture. Try it and see what you think. 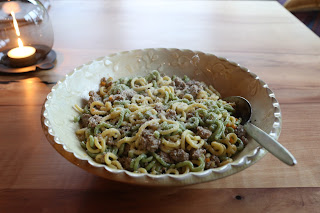 Feel free to experiment with the green dough using different bronze dies. I made a green rigatoni that worked well in a light cream sauce with pancetta and peas dusted with Parmesan. 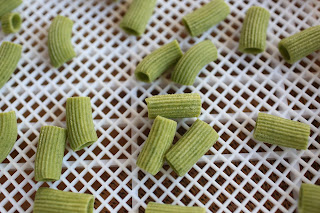