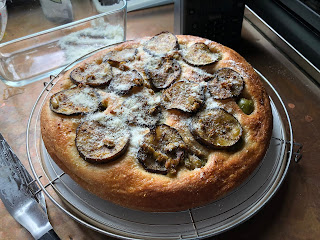 The 2010 English-language edition of The Slow Food Dictionary to Italian Regional Cooking lists fifteen different types of focaccia. It defines focaccetta di Aulla as a flatbread; focaccia al miele as a sweet pastry; focaccia di Lerici as a cake; and focaccia di Pasqua salata di Pitigliano as a loaf. Focaccia farcita contains boiled vegetables—field greens, asparagus, artichokes, potatoes—sandwiched between two disks of dough and then baked. To make focaccia di Voltri, a specialty of Genoa, mix a “relatively liquid dough,” coat it with corn flour, and bake it on a hot plate.

Here in the United States, only one type of focaccia—focaccia genovese—has achieved anything close to a stronghold, and then only, in the eyes of many, as pizza’s poor relation. As Colman Andrews writes in The Country Cooking of Italy (2011) “…it would not be entirely incorrect to describe the most common varieties of focaccia as pizza crust without the toppings (or with the simplest of them, like just salt, olive oil, and/or rosemary or other herbs).”

Focaccia deserves more respect. This ancient bread boasts a primal lineage and the best examples rank among the world’s most delicious breads. In The Food of Italy (1971), the great Waverly Root—second from the left on this site’s banner—writes that focaccia’s “…origin reaches so far back that no one knows when it was first invented….” We do know that the word focaccia derives from focus, the Latin word for “hearth.” When describing a particular region’s version, Root often calls focaccia a hearth cake “as its name indicates” because these early flat breads cooked on a hearth’s hot stones or among ashes.

Fortunately, home bakers can make excellent focaccia without stones, ash or even a fancy bread oven. In my opinion, the best focaccia comes via a Nancy Silverton recipe that appeared in a 2011 Los Angeles Times article entitled Master Class: Chef Nancy Silverton. In this article, Silverton describes her quest to find the secrets to baking great focaccia and shares her “basic” focaccia dough recipe.

If you know anything about Silverton, you know that there is nothing “basic” about her bread. After sharing Silverton’s base dough recipe, the LA Times article presents different ways to embellish the dough: Roasted Pepper and Chile, and Onion and Sage. Each taste fine, but, for my money, the paragon of Silverton’s focaccia is a version made with green olives and fennel pollen. The published recipe in the LA Times makes 2 rounds. I modified the recipe to make a single round and to add metric measurements.

Note: This recipe requires the use of a stand mixer, 1 10- by 2-inch round cake pan and a digital kitchen scale.

1. In a small mixing bowl (preferably plastic or ceramic), sprinkle the yeast over the water. Set the bowl aside for a few minutes to give the water time to absorb the yeast. Using a wooden spoon, stir in the bread flour until all the ingredients are thoroughly combined.

3.  Set the bowl aside at room temperature (ideally 68 to 70 degrees) until the sponge becomes bubbly and thick, like the consistency of wallpaper paste (thicker than a pancake batter but thinner than dough), 12 to 24 hours.

1. About 3½ hours before you are ready to bake the focaccia, place the water, 5.5 grams olive oil and 93.5 grams of the focaccia sponge in the bowl of a stand mixer. (Toss out the unused focaccia sponge or use it to make another round.) Fit the mixer with a dough hook and, over low speed, add the yeast and 220 grams bread flour. Mix the ingredients over low speed for 2 minutes to thoroughly combine and form the dough.

2. With the mixer running, slowly add the salt, then increase the speed to medium. Continue mixing the dough until it is smooth and well-formed, and starts to pull away from the bowl, 6 to 8 minutes. Note that the dough will not pull so much that it “cleans” the bowl, but if the dough is too sticky and is not pulling away from the sides of the bowl at all, add a little more bread flour (a spoonful as needed at a time) to achieve the right consistency.

3. While the dough is mixing, lightly grease a bowl large enough to hold the dough when it doubles in size with olive oil. When the dough is ready, turn it out of the mixer into the oiled bowl. Wrap the bowl tightly in plastic wrap and tightly wrap the perimeter of the bowl with kitchen twine or another piece of plastic wrap to further seal the bowl. Set the dough aside at room temperature (ideally 68 to 70 degrees) until doubled, about 1½ hours.

4. Dust the work surface lightly with flour and turn the dough out onto the floured surface. Acting as if the round has four side. Fold the edges of the dough toward the center. Turn the dough over and return it, folded side down, to the bowl. Cover the bowl again with plastic wrap and set it aside at room temperature until it has doubled in volume, 50 minutes to 1 hour. (The dough will be puffy and feel alive, springy and resistant. It will not collapse under the touch of your fingertips.)

5. Pour 110 grams olive oil into the 10-inch cake pan and tilt the pan so the oil coats the bottom evenly. Place the dough in the prepared cake pan and very gently pull the edges just to obtain a roughly round shape. Cover the pan with a clean dishcloth and set aside at room temperature until the dough relaxes and spreads to cover about half the surface of the pan, about 30 minutes.

6. Heat the oven to 450F. Remove the dishcloth from the top of the cake pan and, using your fingers, gently tap down on the focaccia with about 5 light strokes to nudge it toward the edge of the pan; it might not reach the edges, but don’t worry.

7. One at a time, starting from the center and working out, push the olives into the focaccia dough while simultaneously pushing outward to encourage the dough toward the edge of the pan, arranging the olives evenly over the surface of the dough and pressing them so deep that they are almost flush with its surface. At this point the dough should be touching the edge of the pan. 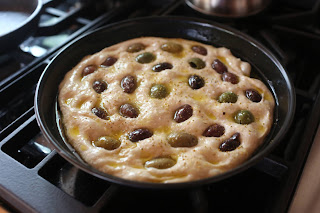 8. Brush the surface of the dough generously with olive oil, then sprinkle over the sea salt and fennel pollen. Set the focaccia aside until it has risen and puffed around the olives, about 30 to 45 minutes.

9. Place the focaccia on the center rack of the 450F oven and bake until crisp and golden-brown, approximately 24 minutes.

10. Remove the pan from the oven and remove the focaccia from the pan to a wire rack (use a fork to gently lift and slide the focaccia out of the pan). Brush the surface of the focaccia once more with olive oil. Set aside to cool slightly—or as long as you can resist it.

After making this bread a few times, I started to play around a bit with the ingredients. I tried a mild Ligurian extra virgin olive oil from Azienda Agricola Vittorio Cassini. This EVOO makes the bread even more delicious. 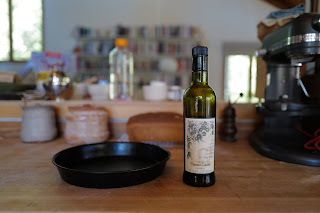 Next, I experimented with a different flour blend. Instead of using 220 grams of bread flour in the dough, I blended 170 grams Central Milling Organic Artisan Bakers Craft Plus bread flour with 42 grams whole grain Kamut flour and 8 grams Central Milling Organic Medium White Rye flour. I mill the Kamut the morning of the bake. I don’t know what it is about this particular flour blend, but the results taste amazing.

Finally, I want to share a recommendation for a nice, dedicated focaccia pan. I bought a 26cm Ottinetti blue steel deep round baking pan that measures across just a tad over 10 inches. It’s the perfect pan for Silverton’s focaccia recipe. If you buy this pan, you may wish to line the pan’s bottom with a round of parchment paper to insure against sticking the first couple times you bake. After a couple of rounds, my pan was seasoned and I now forgo the baking paper. 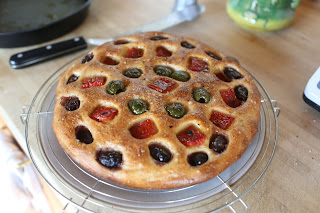 Silverton’s focaccia lends itself to different toppings. In place of olives I once tried cubes of grilled artichoke heart. I’ve inserted different roasted peppers that turned out a round resembling a delicious stained-glass window. I topped my latest version with Japanese eggplant, anchovies and garlic that I added after an initial 8-minute prebake. Pulled from the oven 16 minutes later, I sprinkled over a heavy handful of Pecorino Romano cheese. 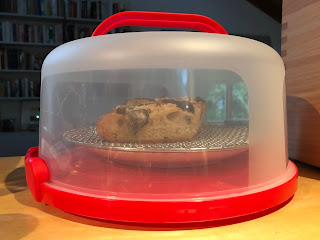