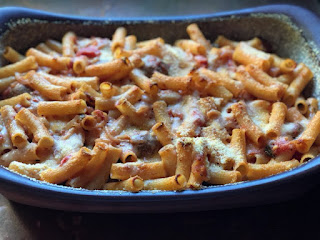 Penguin Random House UK recently published Rachel Roddy’s third cookbook, An A-Z of Pasta - Stories, Shapes, Sauces, Recipes (2021). Many of my favorite Italian recipes come from Roddy’s old food blog, Rachel Eats, and from her first two cookbooks: Five Quarters - Recipes and Notes from a Kitchen in Rome; and Two Kitchens - Family Recipes from Sicily and Rome. In her latest cookbook Roddy turns her focus to pasta. An A-Z of Pasta shares a trove of simple yet excellent recipes that will likely become family favorites.

Roddy opens An A-Z of Pasta with a refreshingly short Introduction and then dives right into presenting different pasta shapes in alphabetical order. Missing is the current cookbook trend of a long personal narrative and extensive ingredient/equipment section. Instead, Roddy successfully weaves essential information about ingredients and pasta making into her survey of the shapes beginning with the letters A, B and C. By the time she covers conchiglie and turns to ditali, Roddy communicates a lot of basic information about pasta while also sharing illustrative and appealing recipes.

Whenever I get an exciting new cookbook, I read it cover-to-cover and then pick out the recipe I want to try first. An A-Z of Pasta gave me a long list of possibilities: Spaghetti alla chitarra con pallottine di pollo in bianco (Spaghetti alla chitarra with tiny chicken meatballs and white wine); Quadrucci alla romana (Quadrucci and peas Roman style); Pappardelle al ragù di cipolle (Pappardelle with onion ragù); and Mezze maniche con gamberi e zucchine (Mezze maniche with courgettes and prawns). In the end I went with a Southern Italian eggplant-spiked baked pasta called Maccheroni ‘ncasciata.

Roddy writes that “Maccheroni n’casciati is a generous and rowdy dish of pasta, small meatballs, cheese and fried aubergine.” Like a lasagne, this dish takes time, but the finished bake warrants the effort. Roddy says her version serves 4 to 6, but I think it will sate a few more.

800g tomatoes, ideally fresh but you can use tinned

a sprig of fresh basil

1 slice of crustless bread, soaked in a little milk

butter and breadcrumbs, for dish

If the tomatoes are fresh, peel by plunging them into boiling water for 60 seconds, then into cold water, at which point the skins should split and slip off easily. Chop the tomatoes roughly, separating away most of the seeds. Chopped tinned ones with scissors.

In a large pan, gently fry the onion and garlic in some olive oil until fragrant, add the tomatoes, basil and a pinch of salt and allow to simmer away for 15 minutes.

Make the polpette (meatballs): use your hands to mix the ground beef, bread, egg, parsley and 2 tablespoons of grated Parmesan and mould into walnut-sized polpette. Allow them to rest if you can, then fry in a little olive oil until brown and pour in the tomato sauce.

Either deep fry the aubergine or spread on a baking tray, drizzle with olive oil and salt, toss with hands and bake at 180°C until golden—about 30 minutes.

Boil the pasta in well-salted water until very al dente. Drain and toss gently with the sauce and polpette and the mozzarella.

Butter and breadcrumb a large baking dish about 25 x 30cm, 2 litre capacity. Pour in half the pasta/polpette mix, make a layer of aubergine and sliced hard-boiled egg, then cover with the rest of the pasta mix. Top with the remaining grated Parmesan and bake at 200°C for 20 minutes. 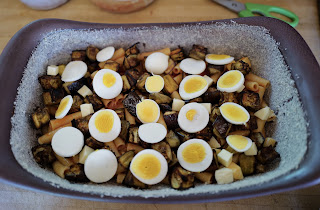 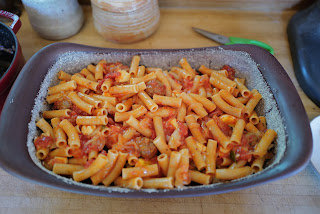 My copy of An A-Z of Pasta came from my favorite Seattle bookshop, Book Larder, which slipped a handy little temperature conversion card into my book. For us Americans 180°C equals about 350°F, and 200°C converts to 400°F.

I made my first pot of Maccheroni ‘ncasciata without any problems. I used a 28oz (794g) can of Bianco DiNapoli whole tomatoes that top any fresh tomatoes I could find on my island in July. I also relied on my own polpette mixture, which is a little more involved than Roddy’s, but remains a family favorite. The oven baked eggplant cubes tasted great. I don’t use a lot of dried pasta, but I am happy with how the rigatoncini from Rustichella d’Abruzzo worked in the recipe.

I am happy to add An A-Z of Pasta to my cookbook library even though the work recalls two other books in my collection. Its ABC organization and classic pasta/sauce pairings resemble The Geometry of Pasta (2010) which features outstanding recipes from Jacob Kenedy. But while Caz Hildebrand’s black and white graphics share center stage with Kenedy’s recipes, An A-Z is all about words and stories. Roddy’s writing craft seems as elemental a part of her book as the recipes.

An A-Z of Pasta’s subtitle, “Stories, Shapes, Sauces, Recipes”, cannot help but call up Sauces & Shapes – Pasta the Italian Way by the great Oretta Zanini De Vita and Maureen B. Fant. Sauces & Shapes, however, feels more instructive and focuses on how Italians do pasta. An A-Z of Pasta strikes me as more personal. 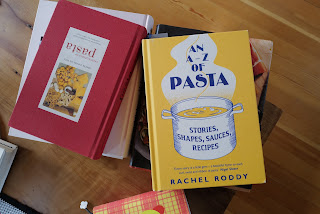