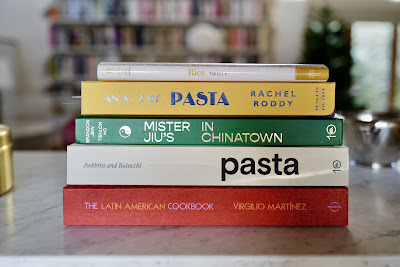 Well, as we near the end of 2021, I guess this year felt a little better than 2020, so that’s something. And, thankfully, a number of excellent cookbooks dropped this year. Here’s my list of the five best cookbooks of 2021.

Mister Jiu’s in Chinatown – Recipes and Stories from the Birthplace of Chinese American Food by Brandon Jew and Tienlon Ho, Ten Speed Press.

Of the hundreds of Italian cookbooks in my collection, Roddy’s three works—Five Quarters (2015), Two Kitchens (2017), and now An A-Z of Pasta—are among my favorites. She has a knack of compiling recipes that deliver simple yet satisfying food destine to become household standards. An A-Z of Pasta ably covers the pasta basics, but the fantastic recipes that accompany her A to Z of pasta shapes are the real reason to buy this cookbook. I previously shared a baked Sicilian pasta recipe (here). I cannot wait to cook her Spaghetti alla chitarra con pallottine di pollo in bianco (Spaghetti alla chitarra with tiny chicken meatballs and white wine). Roddy has written yet another great Italian cookbook.

A theme in my Best of 2021 selections: comfort food. I found chef Virgilio Martínez’s compilation of recipes full of delicious, comforting dishes. Intended to serve as a snapshot of Latin American food, Martínez writes “[t]hrough the process of creating this…cookbook, we carefully observed what we Latin Americans have in common: the meals we serve at home, the foods made in the streets and in our markets, and what an emblematic neighborhood restaurant has served for decades.” Martínez and his team divide the hundreds of recipes into eighteen chapters: Breads and Baked Goods; Sandwiches; Grains, Quinoa and Amaranth; Roots and Tubers; Corn; Garden Vegetables; Beans and Lentils; Fruit; Dairy and Eggs; Fish and Seafood; Beef; Pork; Poultry; Native Meats and Insects; Lamb and Goat; Sweets; Drinks; and Salsas and Condiments. Fans of Maricel E. Presilla’s Gran Cocina Latina (2012) will definitely want to check out Martínez’s exciting new cookbook.

Ten Speed Press originally slated Mister Jiu’s in Chinatown to debut in 2020 but pushed publication to early 2021. Although many of the recipes in this restaurant cookbook may sound familiar—Orange Chicken Wings, Pot Stickers, Moo Goo Gai Pan, Lion’s Head Meatballs—expect sophisticated preparations worthy of a Michelin-starred restaurant. Brandon Jew writes that “Mister Jiu’s came out of my desire to pay homage to my family traditions and my food memories of growing up Chinese American.” Super exciting recipes populate every chapter of this topnotch cookbook. I started with an easy one for Pickled Shiitake Mushrooms from the book’s chapter entitled The (New) Chinatown Pantry. The mushrooms taste awesome thinly sliced and eaten with steamed rice. Jew shares techniques to dry shrimp and scallops, to make char siu, and other pantry essential items like Fermented Chile Paste and Hot Mustard (using Chinese beer). Extra bonus: so nice to read his nod to the talented Jon Smulewitz who ran both Dopo and Adesso in Oakland, CA.

I recently wrote about Missy Robbins and Talia Baiocchi’s Pasta-The Spirit and Craft of Italy’s Greatest Food, with Recipes (here). In a nutshell: Pasta belongs on the bookshelf of anyone with a desire to elevate their pasta-making skills. The cookbook shares recipes for dishes that you might find on the menu at either of Robbins’s Brooklyn restaurants, Lilia and Misi.

Finally, I loved reading and cooking from Michael W. Twitty’s Rice, a Savor the South cookbook published by the University of North Carolina Press. I own four other cookbooks in this collection—Chicken; Gumbo; Okra; and Pie. Mr. Twitty’s work feels weightier especially after watching the transfixing documentary High on the Hog – How African American Cuisine Transformed America. In Episode Two of the show, Twitty and Stephen Satterfield cook Okra Soup over an open fire at a former plantation. Rice contains a version of this soup. Although a thin volume, the book is full of simple recipes to makes delicious food: Wanda Blake’s Jambalaya; Red Rice; Limpin’ Susan; Shrimp Rice; Oyster Pilau; Pork Chops and Rice; Chicken and Rice; Shrimp Pilau. Treat yourself and loved ones to a special meal by buying a bag of Carolina Gold rice from Anson Mills and cooking one of the many excellent rice dishes in this important resource cookbook. 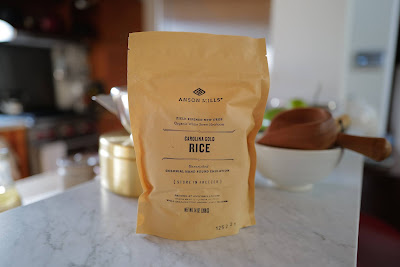 I want to end this Best of 2021 with a bow to a cookbook that I really, really enjoyed reading: Monk – Light and Shadow on the Philosopher’s Path by Yoshihiro Imai (Phaidon). Monk is a small 14-seat restaurant in Kyoto, Japan. It has a woodburning oven. The owner/chef, Yoshihiro Imai, makes pizza and other beautiful food from ingredients that he gathers from local farms. Why pizza? Because he loves pizza. He writes “[p]erhaps it could have been sushi, pottery, or maybe even computer programming. But pizza was what I encountered, and as I continued to make it, I fell in love with it even more, and that love continues to this day.”

Imai’s latest book resonated with me during this time of uncertainty because of his spirit and his passion for craft. Most of Monk’s recipes call for ingredients I cannot source and employ a cooking method I cannot easily replicate. But I really enjoyed reading this lovely cookbook cover-to-cover. If you check out Monk and like it, look for Imai’s previously self-published cookbook, Circle (2014). 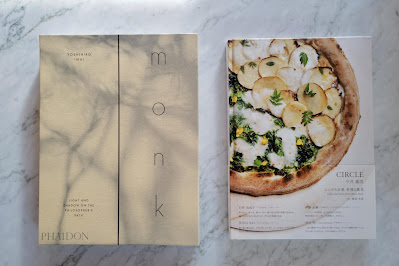 I hope to share one more post this year, but if I don’t, Merry Christmas and A Happy 2022. Let’s be hopeful!